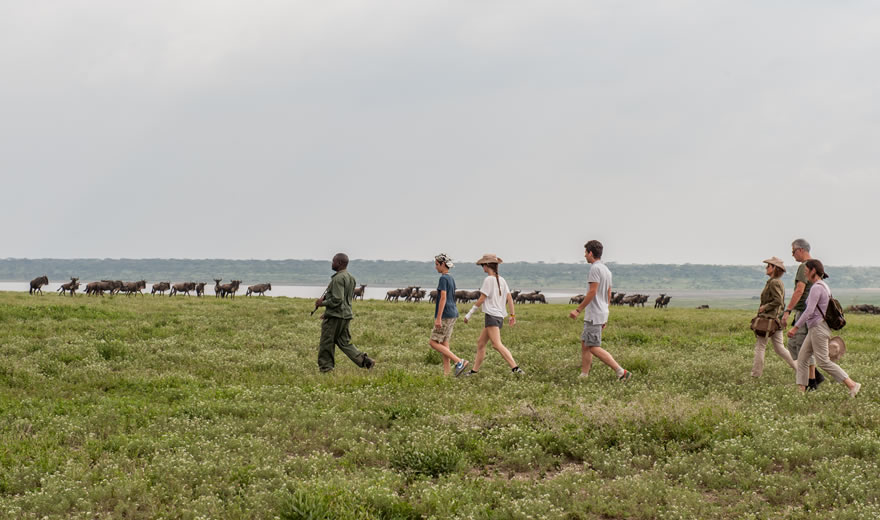 A walking safari is normally designed to fit into your safari schedule, and can be scheduled early in the morning or late afternoon when tropical temperatures are cool. Until recently walking safaris were offered mainly in the Selous Game Reserve and Wildlife Management Areas and restricted to a few National Parks like Gombe Stream, Mahale Mountains, Rubondo Island, Ruaha National Park, Mikumi National Park, Udzungwa Mountains, Kitulo plateau National Park, Mt Kilimanjaro and Arusha (Mt Meru) which may be extended into trekking. Today visitors can enjoy safaris on foot in Tarangire National Park, the Ngorongoro Conservation Area including Ndutu, and within some designated locations in the Serengeti hitherto restricted to game drives and balloon safaris only.

The walks are guided and normally accompanied by an armed ranger. A walking safari is an excellent break from game drives, where visitors will learn some fascinating facts about nature, birds, reptiles, insects and medicinal uses of local plants, which you may not fully appreciate from the seat of your safari car. While the scents and sounds of the African bush are better sensed on foot, it is without doubt an adventure and a thrilling experience especially when the walk extends into wildlife habitats where encounters with freely roaming animals are the norm like in the Selous, Ngorongoro including Ndutu and Tarangire game parks.

Walking safaris are the purest form of safari. Walking in Tanzania is completely different to game driving. On foot you are a participant in the world of wildlife rather than a spectator, a thrilling and unbeatable safari experience.

Walking is only available in certain areas and can be short day walks back to the same camp or can be mobile where the crew pack up your camp and move it for you – greeting you at the end of your day’s walking journey with sun downers.

Imagine, you walk on the same path as the elephants and other wildlife, you feel the wind through your hair, hear a lion roar in the distance and smell the bush and wildlife. Your senses awaken, as you become part of your environment and the wilderness becomes more real.

While animals will generally ignore you in a vehicle, they see you as another type of animal when you are on foot. Getting up close and personal with wildlife is definitely a rush of excitement. Walking is also a great way to appreciate the smaller wildlife, which can’t be so easily seen from a vehicle.

On foot you can walk into remote areas and reach places that a safari car can’t. Once on foot, you are not constrained by roads and can go almost anywhere you like. Away from the crowds, off the beaten track. It offers you a freedom incomparable to any game drive safari.

Chugu Tanzania Adventure Safaris is a pioneer in setting up walking safaris, particularly in  both stunning  National Parks. The regulations stipulate that an armed and qualified walking guide from the operating company must accompany all walks. An armed ranger from the National Park will also join every walk.