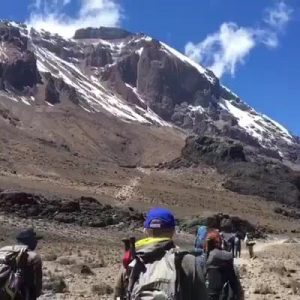 Mount Kilimanjaro is the highest mountain in Africa and the tallest freestanding mountain on earth. Crowned with an everlasting snow-cap, this majestic mountain can be found inside the Kilimanjaro National Park of Tanzania, at 005.00 degrees south, 036 degrees east, 5895m a.m.s.l.

Choosing a Kilimanjaro route, which will satisfy your personal requirements as well as contribute towards your eventual summit success, is important. Factors which should be carefully considered includes:

Below follows a brief summarised comparison of all the current Kilimanjaro routes. For more detailed information regarding each of these Mount Kilimanjaro routes, including routes distances and route success rates, please refer to our detailed and comprehensive routes descriptions under the main link bar above.

Also known as the “Coca Cola route” – the Marangu route is one of the most popular routes leading to the summit of Mount Kilimanjaro. Many hikers believe that the Marangu route is the easiest route to Uhuru peak, since it is the only route which can be hiked in 5 days (making it the cheapest option). It is also the only route offering accommodation on the mountain, in A-frame huts. It is unfortunately a well-known fact, that the 5 day Marangu route has one of the lowest summit success rates of all the routes up mountain. If you choose the Marangu route, we strongly recommend hiking the route over 6 days, to increase your chance to reach the summit successfully. This is the only route, which provides comfortable communal sleeping huts, equipped with beds and mattresses at every overnight site. Mineral water, soft drinks, beer and chocolates are also sold at most sites. The Marangu route utilises the same route for the ascend and descend.

The Machame route is our most popular and successful route leading to the summit of Kilimanjaro. Hikers sleep in tents which are carried up the mountain by porters. The Machame route is a very scenic and beautiful route, which can be completed in 6 days, however we strongly recommend hiking the route in 7 days, allowing for more time to acclimatize. The key to the success of the Machame route is its topography, allowing hikers to climb high and sleep low, helping towards better acclimatization. There are however two drawbacks on this route:

The route utilises the Mweka route as a descend route.

The Umbwe route is known for its caves. The first night you actually sleep at the Umbwe Cave Camp with two more caves that can be visited en route the following day. The Umbwe route is one of the shortest routes to the Southern Glaciers and the Western Breach. It is probably one of the most scenic, non-technical routes on Kilimanjaro. There are however higher risks involved when attempting to summit via the Western Breach / Arrow Glacier and overnight at the Arrow Glacier camp, which include:

Most of our Umbwe route hikes are currently re-routed, to join with the Machame route from night 2 on the mountain. On special request we can assist with Umbwe route hikes attempting to summit using the Western Breach / Arrow Glacier path and overnight at the Arrow Glacier camp (and the Crater camp). Please note this can only be arranged through our higher quality Superior Packages and a supplementary rate will apply.

The Lemosho Route is a very beautiful and unspoilt route and sightings of wild game in the forest section is possible. The Lemosho route is one of the quieter routes up Kilimanjaro, this advantage however disappears when the route combines with the Machame route on the 3rd day of the hike. For those seeking a quiet route away from the crowds, the route is a superior option to the Rongai route. Unlike the Rongai the Lemosho route has the same excellent pro-acclimatization features of the Machame route, which it joins just before reaching Lava Tower. We do not recommend hiking the Lemosho route during the rainy season as the start point of the Lemosho Route is particularly inaccessible during the wet season. Climbers should be prepared to walk the final 2-5 kilometers of the road following heavy rains. The journey time to reach the start point is quite long and joined to the possibility of not reaching the end of the road by vehicle head torches may well be needed to reach Forest Camp on day 1.
The route descents along the Mweka Route, a descent-only route.

The Rongai route ascents Kilimanjaro from the north-eastern side of the mountain, along the border between Tanzania and Kenya. This route retains a sense of unspoilt wilderness and offers a different perspective on Kilimanjaro by approaching it from the north. The Rongai route’s premier advantage is that it is one of the quietest routes on the mountain. A disadvantage is the long travel time to the starting point of the route. The route also becomes busier when it connects with the Marangu route just before reaching Kibo hut.
The Rongai route descends along the Marangu route as well, however you still sleep in tents, and do not use the A-frame huts of the Marangu route.

This route may only be use as a descending route for all the western routes.

The Northern circuit is the area that connects the northern side of Kilimanjaro with the western side. The area is pristine with great views and very few hikers. On special request, can we arrange to include the Northern circuit in your hike, as follows: